On March 3, 2006 the haudenschildGarage presented the panel Alternative Universes in collaboration with the Visual Arts Department of UCSD. Alternative Universes took place at the haudenschildGarage and Estación Tijuana (Tijuana, Mexico) a space founded and run by Tijuana-based artist Marcos Ramirez ERRE. A presentation at Lui Velazquez followed the panel.

Four innovative and independent art spaces were invited to discuss their work and their practice. Each of these alternative universes treats the white cube space in different ways, engaging their communities and mapping themselves in their urban setting while pointing to the educational institutions and relationships from which many are formed. Some act as wedges in the cultural matrix, some fill the gaps while others behave more parasitically on the city and its institutions. “Alternative Universes”  also provided a forum to discuss the ways artists and curators are working together to reinvigorate the counter-tradition of the alternative art space. We also hoped to address how spaces developed on the edges or in the barrios of major cosmopolitan spaces are specifically addressing issues such as marginalization, gentrification, and cultural tourism.

About the Alternative Spaces

ART2102, organized by Erlea Maneros, Renaud Proch, and Ronni Kimm is based in East Los Angeles. ART2102 acts as an option for research and exhibition practices unsuited for traditional institutional engagement.

ESL (Esthetics as a Second Language) organized by Nate Harrison, Hugo Hopping, and Mario Garcia Torres brings together an interest in collaboration and a one night only exhibition project in Los Angeles.

Lui Velazquez, organized by Shannon Spanhake, Camilo Ontiveros, and Sergio de la Torre in Tijuana, is an emerging residency program that brings together visiting scholars and writers for research based projects and presentations.

Slanguage is organized by Mario Ybarra Jr. and Karla Diaz and is invested in community projects such as art classes for school kids and participating in the cultural space of Wilmington, the city adjacent to the largest port in the country. 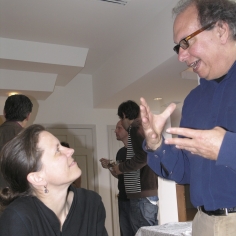