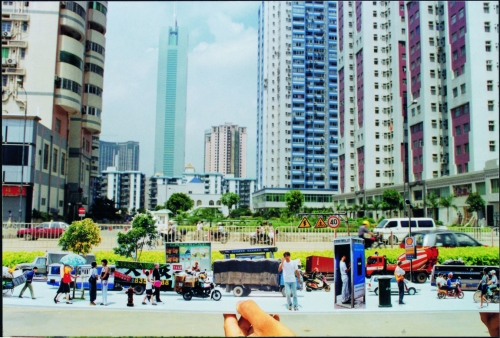 Published in the Zooming into Focus exhibition catalog, 2005

As the opening of Zooming into Focus: Contemporary Chinese Photography and Video from the Haudenschild Collection at its final venue the National Gallery in Beijing draws near, it is time to pause and reflect on the exhibition's significance. Since its inaugural showing in 2003, at the University Art Gallery, the San Diego State University (U.S.A.), the exhibition has traveled to the Shanghai Art Museum (China), the Centro Cultural Tijuana (Mexico), the Institute of Contemporary Arts (Singapore) and, now, the National Gallery in Beijing (China). During these two years, interest in contemporary Chinese photography and video has mushroomed. When Eloisa and Chris Haudenschild began collecting, only specialists in the field had heard of the young artists whose works so fascinated the Haudenschilds. Now, many of those same artists are in very high demand for international exhibitions and important collections. The Haudenschilds were prescient in their focus, driven by Eloisa's enthusiasm, and guided by Lorenz Helbling, director of ShanghART in Shanghai.

As the exhibition of a private collection, Zooming into Focus has had a certain nimbleness and allure. Representing a personal vision, it has not been expected to present a complete or historic view of the field. Nevertheless, it has captured a major slice of Chinese photography and video, representative of a signal moment. Private collections are well suited to capturing the life of a vibrant art movement, driven as they are by passion, unencumbered by institutional impedimenta. The Haudenschilds' enthusiasm for the field extends beyond collecting: as part of the overall Zooming into Focus program, they have commissioned new works (not necessarily collectible), have sponsored lectures and video screenings, and have supported two symposia focusing on contemporary Chinese photography and video, in San Diego and Hangzhou.

[i] Co-organized by the Smart Museum, University of Chicago and the International Center of Photography, New York, in collaboration with the Museum of Contemporary Art, Chicago and the Asia Society, New York; curated by Wu Hung and Christopher Phillips.