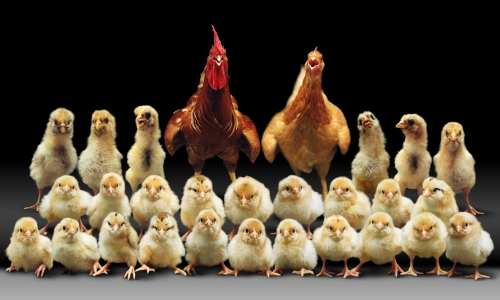 China's National Art Museum is currently hosting what some are calling 'its best exhibit ever.' The modern video and photography arts of contemporary China converge in this enormous collection, belonging to Mr. & Mrs. Haudenschild, whose collecting interests have migrated from South America's contemporary voices to China's Mainland. It's a stronghold of landmark artworks from the breakout period of the early 90s, and this is a 'once in Beijing' opportunity to see them all in one place. They're fun and interesting works, nothing shocking or is tasteful, but still challenging and provocative. Go at once to the art museum, but make it before the 20th of November, when the show ends and art fans sadly walk back to the distant 798-Dashanzi district.

This isn't your usual brushwork and ancient bronze Chinese art exhibition. The ambitious Zooming into Focus exhibition features over fifty contemporary Chinese photographic and video works from the Haudenschild collection.

The contemporary Chinese art movement began at the end of the 1980s but it has received more exposure and interest in the West then at home. "I noticed this bizarre phenomenon. I think it's really ridiculous that we are concerned about our own culture and art only because it succeeded overseas," said Li.

Zooming into Focus will display over fifty contemporary photographic, video and installation pieces by fourteen artists including Cao Fei, Chen Shaoxiong and Feng Mengo, whose works have been previously shown at the Venice Biennale, Dokumenta Kassel, Mori Museum Tokyo, Yokahama Triennale and MOMA New York as well as in several domestic museums.

Initially contemporary Chinese art could only be displayed overseas, so inevitably a lot of works were produced deliberately to cater to Western tastes, while the Chinese audience had no time to assimilate to new forms. "I want to clarify the misunderstanding here. Contemporary Chinese art is in fact beautiful, aesthetic, and even humorous - many works nowadays are based on people's daily life, such as the use of the internet," Li said.

Shi Yong, one of the participating artists has his own opinion about getting some local exposure, "I feel very lucky that we can do this exhibition in our home country today. Actually many Chinese artists care more about domestic exhibitions then overseas ones."

Contemporary art in China reflects the country's rising influence as an economic, political and cultural force in the international arena. Chinese artists, especially those working in photography and video, are gaining international recognition for their powerful works addressing a rapidly changing society that is influenced by Western ideals and art practice, yet remains distinctly Chinese in its content and aesthetics.

The National Art Museum of China presented the exhibition Zooming Into Focus: Contemporary Chinese Photography From the Haudenschild Collection. The exhibition highlighted the remarkable photography and videography works currently being created in China. The swift transformation of Chinese culture is reflected in the work of each of the participating artists, who comment on contemporary Chinese urban life with intelligence, wit, apprehension and nostalgia.

Noted American art collectors Eloisa and Chris Haudenschild have created one of the most important collections of contemporary Chinese art in the world. Focusing on the work of experimental artists from Beijing, Guangzhou and Shanghai, the collection makes groundbreaking contributions to the field of international contemporary art. The National Art Museum of China, which is China's national museum for the visual arts, focuses on collecting, studying and exhibiting China's modern and contemporary works of fine art.