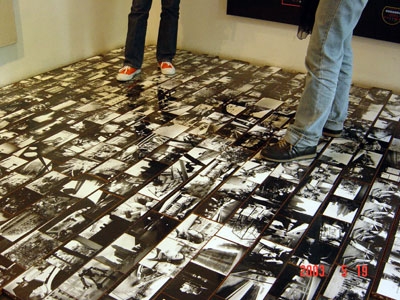 Published in The Shanghai Star, February 2004

The exhibition, to be held in the Shanghai Art Museum until March 28, includes over 50 works by 14 artists, such as Zhang Peili, dean of the new media department in CAFA, Zhao Bandi, known for his serial pictures with a stuffed panda toy, and many others widely exhibited at the Venice Biennale, the Shanghai Biennale, Documenta Kassel and other leading international visual art exhibitions.

"Visual art in China, after 20 years of fluid development, has joined the mainstream," said executive director of the museum, Li Xiangyang. The popularity of home video made video art accessible to more people and has greatly accelerated the development of the novel art form since the early 1990s, said curator Li Xu.

The collectors, Eloisa and Chris Haudenschild, started to buy contemporary Chinese photography and video works three to four years ago. Eloisa had been a dancer and choreographer, and has been the president of an art association "Insite", working with artists from Latin America. "I never re-sell any piece," said Eloisa Haudenschild. "Instead of keeping them to myself, I exhibit them in America, Mexico and other places, exposing them to the world." Haudenschild has cherished her friendship with the artists, regarding this as the most important part of a collector's role. "I know each artist personally. I don't like their work just for its exoticism but because it is great art work," she said.

Haudenschild even started a residence programme, inviting Chinese artists to spend a few weeks with them in America. Yang Zhenzhong was one of the early participants. Yang's video work "I Will Die" shoots hundreds of individuals uttering these words. Different perception of death among these people is revealed in the process. Yang had shot the video in many different languages and with Haudenschild's involvement, he also shot it in English and Spanish in the US.

"I was very excited at the first sight of these works years ago when I encountered them in the ShanghART, so I bought many of them," Haudenschild said. Having collected Latin American art pieces for years, her interest turned to contemporary Chinese video and photography. Soon this area took up one third of her collection.

"I feel weird about this exhibition," said artist Zhao Bandi, "Almost all the contemporary Chinese photography and video works have been collected by foreigners." Chinese collectors remain doubtful about the value of new media visual art. Although traditional Chinese paintings fetch extremely high price at auctions, collectors are not prepared to pay thousands of US dollars for a photography work. "New media art is still in the experimental stage in China," Li said. "New media always attracts attention and brings out the creative impulses of artists."