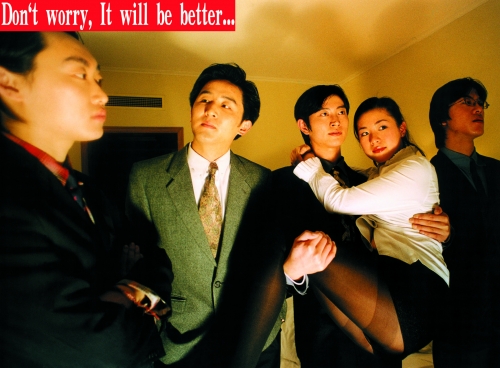 Don't Worry, It Will Be Better 8

In Shanghai, around 40 modern art galleries have sprung up in the past year. The boom follows predictions of art connoisseurs and collectors that Chinese contemporary art will leap in price in the next few years, fueled primarily by the growing Chinese economy and the recent influx of local buyers entering the market.

For the past two decades, collectors of contemporary Chinese art have been primarily European or American, but in recent years locals have acquired the buying power and the desire to snap up pieces of homegrown art. It's not surprising that auction houses have followed in their wake.

"The opening up of auction houses in the last two years has been outrageous. They've opened in Beijing, in Hong Kong and now in Shanghai," says co-director of Art Scene in Shanghai Elisabeth da Brabant. "I heard that one entry fee was RMB250,000. It's principally Chinese buyers that are pushing up the price falsely. There are lots of boys with big black bags of cash. It's like the stock market. It's all about face really - it's all about venture capital."

There is increasing concern amongst gallery owners in Shanghai that these auction houses attract primarily investors who are intent on improving their appearance. Many believe the heady optimism in China's art market will fuel speculation and superficially inflate the prices in the same way the house market has been over inflated. The nation's largest auction house, China Guardian, says sales of Chinese paintings have almost tripled since 2003, with spring sales hitting a record high of US$44.5 million in 2005. More than 60 percent of these artworks are from 20th century artists. Thus the prediction that the new generation of moneyed Chinese will now be looking to line the walls of their penthouses with the works of famous pop artists like Li Shan.

These developments have been making small-time buyers intent on fostering the works of avant-garde Chinese artists rather nervous. "It is going to happen - quality always survives. I trust and hope that the quality will remain high," says US-based collector, Eloisa Haudenschild, who has been collecting Chinese contemporary photography and video art for the past five years. "I feel that by buying a piece I am supporting their development. Collecting allows me to share in the artist's journey. It affords me the opportunity to support the artist and to participate in the process at a point when I can make a difference."

Over the years, Haudenschild has collected around 100 pieces of Chinese contemporary art produced by artists across China. She rattles off names with great affection: "Yang Fudong, Cao Fei, Shi Yong, Hai Bo, Yang Zhenzhong, Xu Zhen, Xiang Liqing - they are all my friends. They are very special to me. I feel that buying artwork is like an exchange - it's a privilege."

Each year, Haudenschild makes a pilgrimage to China to visit her friends, to see their development and to invest in their artwork. Traditionally, a Chinese art collection has been something that can be acquired relatively cheaply compared to a European collection, but escalating prices have made Haudenschild somewhat jittery. "I hope Chinese artists are not lured by the limelight," she says. A statement like this may seem a little belated, considering that in recent years, many "shock" artists have thrust themselves into the spotlight with bizarre acts that hark back to the age of Dadaism. Semen-infused furniture, cabbages on leashes and naked artists hugging pieces of rubble haven't exactly brought collectors to their knees, but they have helped to whip up interest from collectors who are listening - hoping to hear the voice of this new generation.

The avant-garde gold rush has started to elbow out not only philanthropic collectors intent on nurturing young talent, but also the communities that gave birth to some of these contemporary artists. Take, for example, the rightful birthplace of Shanghai's art scene - Moganshan Lu - which was originally a small lane filled with dilapidated vacant warehouses along Suzhou creek. Yunnan artist Kun Bu Lei, who came to the area five years ago, says at the start there were just a few furniture factories. "Back then it was like stumbling across ruins."

But at its peak, Moganshan Lu held a creative community of one hundred artists, sculptors and photographers who claimed the crumbling warehouses and renovated them with boundless ingenuity. Recently, however, many artists have been driven out by astronomically high rents caused by the recent buzz around the area. "It got to the stage where many artists couldn't concentrate on their drawing because they had to survive. I would say there are only about 10 artists now living in the area." Indeed, Kun Bei Lu's warehouse, which is filled with ancient sculptures, bouncy world music and canvases bearing the faces of grinning, toothless green-suited characters, now lies squished between a slick design studio and a stark whitewashed gallery.

"In the last six months, six new galleries have opened up in the area. There's a real energy and a feeling of competition. It is going to get more finely tuned," says da Brabant, whose Art Scene is one of the largest and longest-standing contemporary galleries in Moganshan Lu. Remaining competitive, yet artistically true to the pulse of contemporary art in China is a fine balance for many galleries. Since the late 90s, China's art scene has entered a stage that defies labels - there is no longer a collective voice of "disgruntled artists" spawning branded irreverent artworks. Feeding the mighty demand for bold politicised images that dominated the art scene in the 1980s, whilst simultaneously giving exposure to those artists producing more subtle works that illustrate everyday life in China, has become a difficult task. "Political artworks are always popular amongst collectors. In the '80s, there was a tremendous amount of political and social comment.

Now it's more reflective and figurative. It's more conservative, not so aggressive," says da Brabant. "What we like to do is look for something innovative, something that has a sense of soul. Not something that is just pop culture alone. We like to find something where the artist has gone beyond the image - something that has more depth and is more reflective. "Getting caught up in a tide of collectors who bring preconceived ideas of what Chinese art should be proves to be a dangerous path to take, so many galleries are trying to lead their collectors away from these trendy works. Since it opened its doors in January 2004, Shanghai Gallery of Art has done a brisk trade with overseas collectors selling artworks from primarily high-profile Chinese artists that range in price between US$10,000 to US$500,000. Manager and Curator, David Chan, says he is particularly weary of collectors wanting contemporary works that are typically "Chinese". "We are at the mercy of a booming art market and auction houses who are, in many ways, steering the pricing for artworks. Since the late 1990s what is seemingly "Chinese" at face value tends to attract more collecting interest, but we are busy promoting emerging and younger artists."

Unlike many others however, Chan is optimistic about the future of indigenous Chinese art. "The local interest with art collecting will increase," he says. "The best artwork can stay on home soil as well as in international museums."