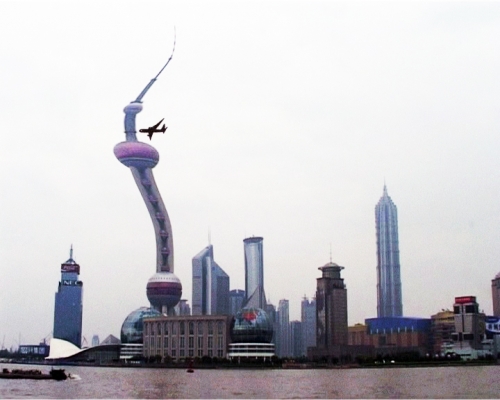 The following text is from a paper presented at the Zooming into Focus symposium  "Envisioning the Future of Contemporary Art from Different Glocal Positions", China Art Academy, Hangzhou, China, March 2004

It was in 1988 when Zhang Peili realized his 30 X 30, one of the first examples of Chinese video art. 30 X 30, a two hour sequence showing the artist breaking and reassembling a mirror over and over again, with its sobriety and its obvious Chan-Buddhist absurdity - at the time called grey humor - is not only typical of the contemporary Chinese art of the late 1980s, but also shows the main characteristics of early Chinese video art. Fixed camera positions, endlessly drawn out shots, underlying the absurdity and strangeness of the image or performance documented, or again the medium of the video installation, typical of Zhang's later works, were main features of Chinese video art until the middle of the 1990s.

Since 1988, fifteen years have passed, and video art in China today is as pluralistic and colorful as Chinese society. Next to Zhang Peili, Wang Gongxin, Wang Jianwei, Chen Shaoxiong, Hu Jieming, Li Yongbing, Liang Juhui, Song Dong, Qiu Zhijie, Wu Wenguang, Xu Tan, Yan Lei, Zhu Jia, and Feng Mengbo belong to a first group of artists working with video and new media in China. Zhang, once pioneer, is today the head of the first multimedia art department at a Chinese academy, the New Media Art Center of the China Fine Arts Academy in Hangzhou. Zhang Peili's style, once experimental, today rather tends to be academic, still showing the quest to create a kind of universal visual language and to set aesthetic and technical standards.

The emergence of this kind of academism within the field of the relatively young Chinese video art guarantees the backing necessary for experimentally working younger generations. Since the mid-1990s, with more easily accessible technical equipment and information, video has become a major form of expression of young Chinese artists. A young generation primarily experimenting with video, film, and other new media has emerged in the urban centers, in particular in Beijing, Shanghai and Guangzhou. These young artists, mainly born in the 1960s and 1970s - for example Cao Fei, Jiang Zhi, Jin Jiangbo, Lu Chunsheng, Shi Yong, Weng Fen, Xu Zhen, Yang Fudong, Yang Zhenzhong, Zheng Guogu and others - not only gained immediate recognition in the Chinese art scene but also garnered success on an international level rather quickly. Since the late 1990s video and multimedia art works of Chinese artists have been selected for numerous international video festivals and have been presented at high-profile exhibitions, such as the documenta X in Kassel in 1997 (Feng Mengbo, Wang Jianwei) or the documenta XI (2002) (Feng Mengbo,Yang Fudong) or again the 50th Venice Biennial (2003) (Cao Fei, Chen Shaoxiong, Gu Dexin, Jiang Zhi, Liang Juhui, Yang Fudong, Yang Zhenzhong, Zhang Peili, Zhu Jia).

The Haudenschild Collection is the first collection focusing on Chinese photography and video art, thus giving witness to the importance of these media. The present exhibition features video works from the collection by artists born in the 1960s and 1970s and working in the Southern Chinese urban centers Shanghai and Guangzhou. Certainly, this generation's enormous interest in the medium video cannot merely be ascribed to the increasing accessibility of technical equipment and know-how. Having grown to maturity in a society in rapid transition, where the fleetness of change makes an individual's life's perspective appear totally unpredictable and where omnipresent media play major roles in determining the perception of what is real and what is imaginary, video (and photography alike) might be a most adequate and direct medium not only to capture the overwhelming changes of personal life, urban environment, and of society, but also to convey the feelings of uncertainty and vagueness felt by the majority of the young generation. Yang Fudong describes these feelings as a distance to life that is evident in the videos and films of his contemporaries on a conceptual and on an aesthetic level. Alienation and perception are major themes, and the wish to grasp reality and take hold of this ever-changing life, is at the origin of the quest to integrate art into life, or to consider art a "by-product of life". On an aesthetic level this distance generates a kind of poetic melancholic mood and humor typical of this generation of artists.

Yang Fudong (1971) graduated from the China Fine Arts Academy in Hangzhou and moved to Shanghai in 1998. The so-called literati short films, as well as the Chinese cinema of the 1920s/1930s and the Yuefen-style typical of the Shanghai petit bourgeoisie of the early 20th century are important references for Yang. His strongly narrative videos, films, and photographic series can be read as allegories of the alienated city-dwellers' lives. The narratives enfold sometimes in high-rise apartment and office-buildings, the typical environment of the new middle-class Chinese of the metropolis, the so-called "white-collar" (bailing), like for example in "City Lights" ("Chengshi zhi guang") and "Honey" ("Mi") - both part of the present exhibition - sometimes in a dreamlike setting reminiscent of traditional Chinese gardens and the Chinese literati landscape, like for example in "Su Xiaoxiao" (2001), "Tonight's Moon" (2000), and "Liulan" (2003). "City Lights" (2000, 6 minutes, color) recounts the life of such a white-collar, performing his prescribed every-day ritual, sometimes feeling like standing beside himself and being left alone with his solitary but ready-made dreams of a modern life. The stereotype of him holding and passing on an umbrella occurs throughout the video. "Honey" (2003, color), evocative of some ominous spy-story, similarly is set in some apartment and backyard of high-rise buildings in the metropolis. The image of a young mundane girl moving from one place to another, or in the company of blankly gazing, discreet men in Mao-suits appears throughout the video. Close-ups of her body and dress might hint to the nature of relationship between the protagonists. But the story Yang recounts never gets explicit, only suggesting the possibility of their interaction through the creation of a never fulfilled suspense. Even though Yang Fudong's works have a strong narrative component their message is never clear. Yang rather creates a filament of allusive images, underscored by sound and text, letting the viewer alone with a multitude of ambiguous insinuations that he calls "abstract imagery".  According to Yang, "abstract imagery" can convey the inexplicit feelings of the individual and engender a transformation of perception.

The transformation of perception is also a concern of Shanghai-based Yang Zhenzhong. Yang (1968) who graduated from the oil painting department of the China Fine Arts Academy in Hangzhou in 1993, started working with video and photography in 1995. His approach is rather metaphorical than narrative. His videos often start from witty ideas, using the repetition of images and the rhythmic coordination of sound, language and image. "922 Rice Corns" ("922 ke mi", 2000, 8 min., color) plays with the interaction of the image of a cock and a chicken pecking grains of rice and the sound of a male and female voice counting the number of pecked grains. "Let's Puff" ("Wo chui", 2003, Zone of Urgency, 50th Venice Biennial) similarly starts from the interplay of two images: a young woman puffing and a busy street. Every time the woman is puffing, the image of the street moves away from the viewer. The rhythm of the traffic and the angle of perception are altered with the rhythm of the woman's breath. Yang's often playful videos could be called visual reflections. Individual perception and experience, as for example in his "I Will Die" ("Wo hui si de", 2000), are the starting point for the transformation of perception, as Yang points out: "Sometimes I feel that if you deal with individual experience on a certain level it becomes universal experience. "That's not to say I think theory is of no importance, actually art is also not that important, they are all the by-products of life."

Guangzhou-based Chen Shaoxiong (1962) who graduated from the Guangzhou Fine Arts Academy is one of the pioneers of Chinese video art. With him, the concept to lead art back into life, or to consider art a by-product of life takes a more radical and subversive stance. As with other artists of the Cantonese avant-garde, for him the creation of an allusive imagery is less important. Being a member of the Big Tail Elephants Working Group (Daweixiang gongzuo xiaozu), called "urban guerrilla" by Hou Hanru , Chen searches a direct interaction with his urban environment. The perception of reality again is the artist's concern. Chen's early videos of performances, such as "Five Hours" (1993), as well as his "Sight-Adjusters" (1996), installations with split-screen videos, and his "Streets" (1997- today), a series of three-dimensional photo collages, tend to reveal perception as a conceptual construct depending on outer conditions, such as the rapidly changing urban environment. "Figure Anti-Terrorism" ("Huayang fankong", 2003, Zone of Urgency, 50th Venice Biennial), which is part of the present exhibition, is Chen Shaoxiong's answer to the global anti-terrorism campaign. The computer-generated video installation consists of a chessboard - the figures are airplanes and buildings - and two video projections that show high-rise buildings in the southern metropolis of Guangzhou using different tricks to avoid the impact of approaching airplanes. Chen's work is not only a witty comment on current events, but also a reflection on how the perception of the urban environment changed after September 11. On a more general level, Chen's work explores how the real-time mediation of a real event that had formerly only been thinkable as imaginary redefined the limits of perception. Within these newly defined limits, video can act as an expansion of reality.