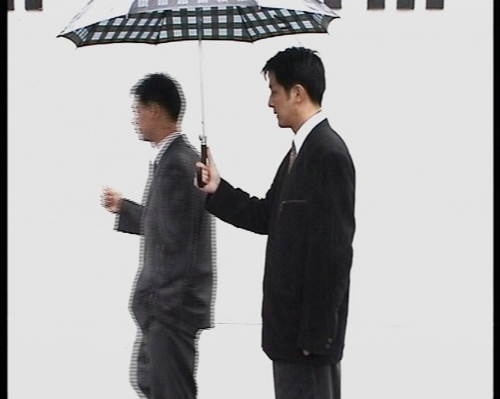 The following text was published in The San Diego Union Tribune, February 2004

On one wall in SDSU's University Art Gallery is a video of a crowd moving at a typical pace down the street. On another, a facing wall, we see the image of a woman. She takes in a lot of air and blows hard. Then, life on the streets of Shanghai changes. Everyone and everything accelerated. Life becomes twice as fast. She rests and the city returns to normal. She blows and the pace of the city quickens. The action is in Yang Zhenzhong's comic Let's Puff (2002). It's not laughing-out-loud funny but charmingly so - a little like a moment from a Buster Keaton film. The woman keeps puffing and his video keeps the people in step.

It is also a metaphor, whether intentional or not, for the pace of life in China and the accelerated pace of change in its expanded economy. Americans have ample anecdotal evidence of this expansion; Most things we consume seem to be made in China nowadays.

The pace of interest in Chinese photography and video in the United States resembles that of the people in Let's Puff. In October, SDSU presented an exhibition of new Chinese photography, Zooming into Focus, and brought some of the artists to town, courtesy of Chris and Eloisa Haudenschild of La Jolla; for the past couple of years, they have been collecting these works and championing them.

The International Center for Photography in New York and the Asia Society are presenting New Chinese Photography in June and the Museum of Modern Art is opening an exhibition of video works by Chinese artists shortly. The Denver Art Museum has a show in the subject and this month's issue of Artnews magazine has devoted its lead story to some of the established and emerging photographers.

The new exhibition at SDSU has the same title as the previous one, Zooming into Focus. Only the subtitle - this time, Contemporary Chinese Video from the Haudenschild Collection - is different. Two of the three video artists exhibited in the first show too. Zhenzhong was one; his photography exudes a similarly droll, witty sensibility. A host of chickens, who have seemingly arranged themselves for a family photograph in Lucky Family 4 (1995), makes for one of the most strangely funny photographs in recent memory. Only digital effects made the mom e possible, but what a Kodak-style moment.

The chickens are back in 922 Rice Corns (2000) - one chicken and one rooster, to be precise. The pleasing absurdity of the video takes a little longer to surface, but it's abundantly evident as the pair of fowl busy themselves eating the grains as a voiceover narrator counts each one of the grains. At the same time, he slips in a sly bit of commentary about gender. The rooster struts and plants himself right in the middle of the food. The chicken works more gingerly, feeding around the edges. And as with the family portrait, parallels between fowl behavior and human conduct are hard to miss.

Zhenzhong composes videos in a style suited to a photographer and conceptual artist. While Yang Fudong was also a featured photographer in Zooming into Focus part one his short works in videos have a cinematic style that sets them apart from Zhenzhong's.

Still, they share a fair for humor. City Light (2000) - which reveals no overt references to the Chaplin classic - doesn't convey a story so much as a middle-class man caught up in his own dream state. He's doing his best to relate to others, as the rest of the people that surface in the six-minute piece. Two guys dresses in the same business clothes rise from a bed, drift away from each other and reunite. One joins briefly in a dance with a woman and then she's gone.

At another moment, he stands in a high-rise with people who are presumable his co-workers. But no one seems to know what he's supposed to be doing other than gazing out the window or staring at each other. Occasionally they spring into action. The main figure hands off an umbrella to his double at one point, which seems to make him happy.

It's all done with an unpretentious light touch. The universe these people occupy is absurd but the anxiety is at a low hum rather than at the high pitch about Kafkaesque events.

Chen Shaoxiong, who lives in Guangzhou, makes his local debut in this exhibition. His two-channel video installation Anti-Terrorism Variety (2002) is more pointed that Zhenzhong's or Fudong's work. There's humor too but with an acidic edge.

He pictures two views of a city. Then silhouettes of planes fly into view, heading for the tallest buildings. There is no mistaking the reference to the events of Sept. 11 but nothing harrowing happens here. With a bit of slapstick flair, the jets bounce off skyscrapers, simply fall to the ground after the moment of contact and in some cases evaporate.

If only that were the case in life. The actions of Shaoxiong's video looks slapstick but the underlying mood is eerie and poignant.