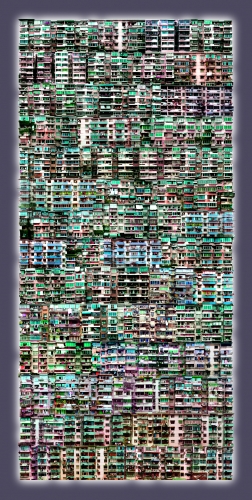 The Haudenschild Collection focuses solely on the media of photography and video. In this respect, it is unique among the increasing number of collections of contemporary art from China. Starting in the late 1990s, Eloisa and Chris Haudenschild travelled regularly to China and slowly acquainted themselves with local art scenes. They started their explorations in Shanghai, where they bought their first pieces from artists such as Yang Fudong, Shi Yong, and Xu Zhen. Zooming into Focus: Chinese Contemporary Photography and Video from the Haudenschild Collection debuted at the San Diego State University Art Gallery in October 2003. It was subsequently shown in Tijuana, Singapore and Shanghai only to end its travels with a grand finale at the National Museum in Beijing from November 5 to 20, 2005 becoming the first retrospective show of contemporary Chinese photograph and video to ever be held there. Although displayed in the side wing of the museum, the show occupied an impressive 1,000 square meters and showcased nearly fifty photo and video works by fourteen artists - the vast majority of them belonging to the Haudenschild Collection, with a few added pieces requested from artists to make the exhibition more representative of the overall field.

The first piece to greet visitors upon entering the exhibition space was Xu Zhen's video Shout (1997), a version of which was also exhibited in the first Chinese national pavilion at the 2005 Venice Biennale. For this work, Xu Zhen positioned himself at busy intersections and then proceeded to periodically emit a scream. The reactions of passerby are videotaped from the artist's perspective. While many of them are unfazed and go on about their business - life in the hectic metropolis having made them immune to unusual external stimulation - others turn around and stare, either to determine the origin of the scream or to simply gawk incredulously at its emitter. The video is highly intuitive in its interaction with the people on the street and immediately engages the viewer, thus making a great entrance piece for the exhibition.

The eerie sound of slapping lured the visitor further into the exhibition space. At the far end of the corridor a narrow crevice in the wall that both revealed and obscured another of Xu Zhen's video work Rainbow (1998). The piece records a naked person's back being violently slapped. All the viewer can see is the person's flesh increasingly turning red. In the beginning, the distinct markings of hands are visible but slowly these prints merge into a large, indeterminate patch of redness. The video was installed in a freestanding cube with only a narrow entrance. Emulating a crack in the wall, the installation effectively conjured up the feeling of voyeurism. It forcefully catapulted the viewer into a state of conflict where the enjoyment of the artwork seems to equate itself with the enjoyment of pain, which in turn elicits a certain degree of revulsion. Beyond doubt, this push-and-pull effect makes Xu Zhen's work more haunting than usual, especially as the muffed sound of slapping lingers and accompanies the visitor as he or she continues on to view the photographs installed in the outside space of the room.

The majority of the photographs displayed in Zooming into Focus reflected the current canon of contemporary photography from China as it has been established by international museum and gallery exhibitions. A whole wall was dedicated to various prints from Zhao Bandi's Zhao Bandi and Panda (1999) series and another to nine works from Yang Fudong's Don't Worry, It Will Be Better (2000) series. Cao Fei's rabid-dog Elle cover girl in Beautiful Dog Brows (2002) lasciviously glared down at the viewer and prints from Chen Shaoxiong's Street (1998), Hong Hao's Mr. Hong Usually Wait Under the Arch Roof for Sunshine (2001), Feng Mengbo's Q4U (2003), Weng Feng's Sitting on the Wall (2002) and Yang Zhenzhong's Lucky Family (1995) were all also prominently displayed. The majority of video works were also among those already widely disseminated in the international art circuit. In addition to the ones mentioned above, visitors could see Chen Shaoxiong's Anti-Terrorism Variety (2001), Yang Zhenzhong's 922 Rice Corns (2000) and I Will Die (2002), as well as Zhao Bandi's The Story of Panda Man Losing His Love (2003).

But among these "old-timers" were also some less well-known but equally important works. Zhu Jia's early video work Forever (1994) for example was displayed along with the tricycle to which the artist had tied the camera that filmed the piece. For twenty-seven minutes the viewer was taken on a head-spinning, ten kilometer tour through Beijing. The blurry and ceaseless rotating images deny the viewer's ability to situate themselves in space as well as in time. In like other works that focus on and document the change in Beijing's urban landscape, Zhu Jia's video seems to point at the constants of urban life, such as the chatter of passerby, cars honking, rushed footsteps, loud arguments at busy intersections and vendors shouting to promote their wares. Another piece that stood out were the two prints of Song Tao's In Loud Crowds I Dream of Hanging Myself (2002). In front of the big black iron gate of a colonial looking building, a young man is propped up as if he had been hanged. The fact that the cord above his head is attached to a small balloon only seems to become clear upon second glance, with the iron gate morphing into an evil blank mask glaring down at its victim. The absolute stillness of the image and its absurd construction such the view into a void where reality is suspended and emotion reigns supreme. It gives Song Tao's work a mediative aura but equally makes the viewer shrink back from this somber state of dislocation and alienation. The overall effect was haunting, especially as the echoes of Xu Zhen's slapping still resonated throughout the exhibition space.

While it is amazing that the National Art Museum allowed for such a show to be displayed in its hallowed halls, the censor's prying eyes could not be completely prevented from finding something to offend them. The huge black-and-white print of Liu Wei's humorous take on traditional Chinese shan shui aesthetic entitled Landscape (2000) illustrates a foggy mountainous vista reminiscent of Guilin's famous peaks. But the mountains are not made of stone and vegetation but of human buttocks. In some cases pubic hair and genitalia are visible as well as mosquitos feasting on their fleshy hosts. Sadly, a week after the opening, Landscape had disappeared from the exhibition walls. It seems -- as if to put it crudely-- it hauled ass.