The haudenschildGarage supported the second annual Great Hall Project Series with Katie Holten at the New Orleans Museum of Art.

Katie Holten: Drawn to the Edge

New Orleans, LA - For the second annual installment of the Great Hall Project series at the New Orleans Museum of Art, artist Katie Holten will map the ever-evolving boundaries or "edges" between land and water in Southern Louisiana through a group of large-scale drawings.

The installation, on view from June 15-September 9, 2012, will be suspended from NOMA's Great Hall ceiling, translating the two-dimensional drawings into a three-dimensional sculpture. Visitors will be invited to take new paths to enter the museum as they walk beneath, through, and around the drawings, creating a new interactive experience in the space. Katie Holten: Drawn to the Edge was commissioned specifically for the series, which provides contemporary artists with an opportunity to develop new site-specific work that is inspired by New Orleans' landscape, culture, and history.

"The Great Hall Project series was designed to foster a dialogue between artists, the museum, and the community about contemporary art and New Orleans as a source of creative inspiration," said NOMA Director Susan Taylor. "Our collaboration with Katie Holten brings a fresh perspective to this conversation through the exploration of the rapidly changing New Orleans landscape. Her transformation of our Great Hall invites visitors to consider our city's natural surroundings and their significance to our daily lives."

Over the last decade, Holten has established an interdisciplinary practice that merges research and drawing to produce poetic and ephemeral works that speak to the human relationship to nature. Drawn to the Edge is rooted in her investigations of the expanding ways that we inhabit and experience our environment.

The installation drawings, which measure as large as 12x36 feet and use a 1:1 mapping ratio, will address the impossibility of representing the constantly shifting environment. Made from sediment and water collected from the banks of the Mississippi River, the drawings will trace the shifting paths of land formation and disappearance much like a time-lapse film.

"The issue of time plays a significant role in Holten's work, and in the Great Hall we gather a sense of urgency from her drawings," said Miranda Lash, Curator of Modern and Contemporary Art. "The fragility of Louisiana's dissolving coast is contrasted with images of deep space. As one landscape rapidly erodes and another continues ad infinitum, we are forced to reflect on our role as humans in making such a lasting impact on our environment."

Earlier this year, Holten participated in a six-week research residency at A Studio in the Woods (ASITW) in New Orleans, during which time she studied the city's infrastructure, focusing specifically on the intersection of architecture and ecology. Holten's Great Hall installation is based on these investigations as well as the city's relationship to the Mississippi River.

"The land is literally disappearing in Louisiana. Since the 1920s oil and gas companies have been dredging access canals and the salt water has steadily moved in, claiming thousands of acres of land every year," Holten said. "The disaster is exacerbated by a web of interconnected geological and man-made processes. During my residency at ASITW, I had a palpable sense of the tragedy unfolding. Some experts predict that within 50 years there will be no land south of Baton Rouge. The land is riddled with water, creating islands within islands." 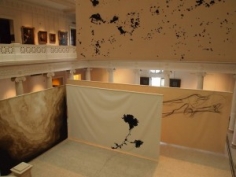 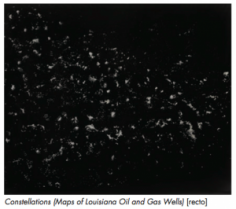 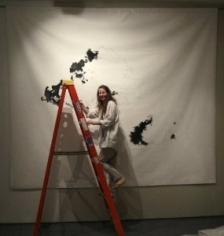